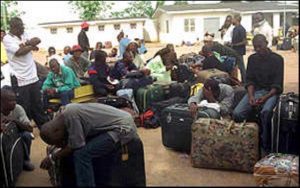 Modern Women of Wisdom International (MWOW) an Advocacy women group Africa has joined numerous organisations and individuals in the world in condemning the slave trade of some African countries in Libya.

A statement issued by the Women Organisation expressed sadness over the matter and stressed the need for African communities to take swift initiative to curtail such scandalous abuses of human rights.

Pictures of slave markets and gross abuse of black Africans are awash on social media after CNN uncovered the fledging human trade in the North African country.

The horrible images show some migrants being sold for $400 while others are tortured to death by individuals in Libyan military wears.

Some Africans have condemned the apparent silence of the continent’s leaders over the development as the AU, ECOWAS and other known regional blocks are yet to comment on the issue.

MWOW indicated that, ‘’as a matter of urgency, we seek the emancipation of all the captives and clearly, the AU has a role to play in areas such as ensuring the release of the victims and punishing the perpetrators”.

”As a humanitarian organization aimed at saving lives and preserving human dignity, we found this heinous crime morally undignified and humanely unjustifiable’’, it said.

Read the full statement
We the members of Modern Women of Wisdom International are not only raising the awareness of the presence of slave trade activities in Libya; we vehemently condemn the preposterous exhibition of racism and atrocious display of slave trade in Libya.

As a humanitarian organization aimed at saving lives and preserving human dignity, we found this heinous crime morally undignified and humanely unjustifiable.

Just when we thought the horror which once existed at the idea of a slave master armed with a dagger, whips, cutlass and guns inflicting pains on slaves was over because slave trade was abolished in 1883, we recently woke up to find human beings bundled and being shipped into foreign countries at a cost of 300 pounds/400 dollars per head in Libya.

As a compassionate NGO, we found the animosity exercised by the captors towards the captives very horrible and we feel the moral imperative to speak out against this barbarism.

Truth be told, no state in the 21st Century prospers by thriving on slave trade. Slave trade belongs to the Stone age. There are now better and more efficient strategies like free trade and free labour that boosts the economy of nations

As a matter of urgency, we seek the emancipation of all the captives and clearly, the AU has a role to play in areas such as ensuring the release of the victims and punishing the perpetrators.

The AU’s commitment to the respect of fundamental human rights must be enshrined and enforced in its treaty.

Again, we humbly call upon the International Community to step up their discussions and rescue strategies as a matter of urgency before the worst happens.

We can’t afford to look unconcerned as Africans because the by- standing effect will either make others feel threatened or encourage others to embark on similar activities.

It is our fervent hope and desire that the International community responds rapidly by rushing to the rescue of all the black captives in Libya.