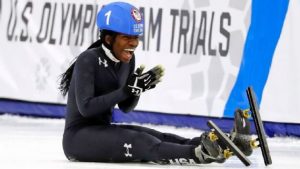 But make history is exactly what she did at the U.S. Olympic Team Trials for Short Track Speedskating. Biney qualified for the Olympic Winter Games PyeongChang 2018 in the 500-meter, becoming the first black women’s speedskater on a U.S. Olympic Team.

And the giggly high schooler couldn’t hold back her emotions.

“Aaaaahhhhhhhh,” Biney squealed to reporters. “I can’t believe it! Ah, jeez. It’s a really good feeling, but it has to set in. It takes me a while before it’s like, ‘Holy cow.’”

At Olympic trials, each distance has two full rounds with two A finals. A skater’s result in each final is awarded a point value and the two results are added together. The winner of each overall distance classification qualifies for the Olympic team.

After falling multiple times in Friday night’s 1,500-meter races, including in the first final, where she was penalized for taking out Katherine Reutter-Adamek, Biney was hoping her falls were behind her and that Saturday would be her time to shine. Plus, she knew the 500 was her best distance.

Biney took full advantage of her strength in the 500, cruising through wins in her first quarterfinal, semifinal and final – beating Olympians Lana Gehring, Jessica Kooreman and Reutter-Adamek in that final.

In the second round, Biney again sailed through the second round, winning the quarterfinal and settling for a close second to Kooreman in her semifinal round. In the final, she exploded off the line to take an early lead that only widened as the race progressed, leaving no doubt as to who would take first place and the Olympic berth. Gehring and Kooreman finished the 500-meter overall classification tied for second.

“I was thinking I had to beat Jess at the start because she has such a good start and I did, so I made it!” Biney said of her strategy for the second final.

Biney’s celebration after that race was priceless. She fell to the ice, first sitting on her butt and giggling, then turned onto her knees with gratitude.

“When I crossed the finish line, I don’t know what I was thinking – I was just like, ‘I got first, that’s so cool.’ And when I realized I made the Olympic team I started cheering like crazy,” she said. “And then I made my epic fall, so, yeah, you’re welcome.”

Biney was a strong favorite to make the three-woman U.S. Olympic Short Track Speedskating Team heading into the trials. She first made a name for herself in the sport last season when she won bronze in the 500-meter at the world junior championships, becoming just the second U.S. woman since 1996 to medal at junior worlds.

Biney easily made her first senior-level world cup team a few months later, when she was the overall women’s winner at the world cup qualifier, beating out several Olympians for that title.

While she has not yet reached a world cup podium, Biney’s star has continued to shine on that stage. In four world cups this season, she has earned fifth- and seventh-place finishes at the short’s fastest, and perhaps most exciting, distance.

Biney was born in Ghana and moved to the U.S. at 5 years old to visit her father. But as the story goes, Biney visited a mall and quickly fell in love with life in the States, so she stayed. Her father enrolled her in figure skating lessons the next year after noticing a sign advertising the sport.

She quickly switched to speedskating at the suggestion of a coach and hasn’t looked back.

Biney was quick to thank her father after qualifying for the Games, attributing much of her success and perseverance to him.

“He’s been through everything and I’m amazed by him. I just want to thank him a lot for everything,” Biney said of her father, Kweku.

“I haven’t been home since October, and that’s the longest I’ve ever not been home. It’s been really hard on him and on me because he helps with my mindset. Before that, he’s been through all the practices with me and watches me every day and gives me tips, and I love him for that.”

Biney becomes the second black speed skater to represent Team USA at the Olympics, following in the footsteps of the legendary Shani Davis.

Davis was two years older when he made his first Olympic team in 2002, also in short track. He soon switched to long track and has since made three more Olympic teams and earned four medals, including two golds.

The teen joins 2010 Olympian Lana Gehring, who qualified in the 1,500-meter, as the first two women on the U.S. Olympic Short Track Speedskating Team. They will both compete in the 500 and 1,500 in PyeongChang. A third woman will join them on the team after Sunday’s 1,000 finals.