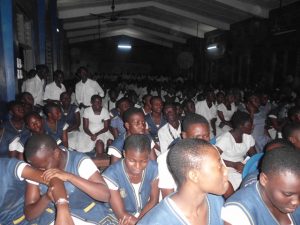 Test results from the Noguchi Memorial Centre for Medical Research have ruled out meningitis as the cause of multiple death at Kumasi Academy.

Four students have died and at least 18 others hospitalized for an unknown diseases in less than one week.

The death of the fourth student on Tuesday morning prompted an emergency stakeholder meeting as parents rushed  to the school in seeking to withdraw their wards.

Large crowd trooped outside to catch a glimpse of the students who were rushed to the hospital.

A meeting with parents and students was nearly interrupted for about half of an hour after two students collapsed in a latest attack.

Some parents accused school authorities for suppressing information on the situation.

A worried parent said, “I am very panicking. It has put fear in me and I would like to take my sons; I have two sons here. I want to them to go to a different school,” she said.

She continued, “They should  allow we the parents to come in regularly to see our wards. We want to see them everyday so they should open their gate for us.

“Because of  the numerous deaths, they don’t want to open up.”

Even then, some would not budge and managed to take their wards home.

“We are treating somebody so that you the parent would also not be infected; other siblings would not be infested. You say you don’t want it. You are not paying anything  and you want to take the child home?” Mr. Osei Mensah  quizzed. According to him, the school would be closed down indefinitely after students are given Azithromycin antibiotics treatment to deal with the illness he describes as a security threat.

“Looking at the level of agitation and apprehension, I think the best thing to do is immediately after  they’ve given the dose, maybe we may have to close the school for sometime.”

The treatment comes as tests run at the Noguchi Centre on three victims ruled out viral hemorrhagic fever, including meningitis.

The decision is that we will start with broad-spectrum antibiotics that every student, every staff would be given this antibiotics so that if there is any serious issue, the antibiotics would be able to cut the transmission  down,” Dr. Tinkorang explained