Michael Essien to engage Chelsea fans in the US 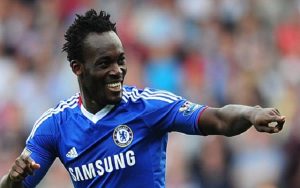 Chelsea fans in the United States will have a special opportunity to meet Chelsea legends Ashley Cole and Michael Essien during an exclusive viewing party of the Liverpool v Chelsea game this weekend.
Cole and Essien, who made a combined total of almost 600 appearances for the club and won multiple trophies, will be meeting fans, signing autographs and taking part in a live Q&A at the Fulton Market Building in New York City on Saturday 25 November.
Looking ahead to the party, Cole said: ‘I am very excited to meet the Chelsea fans in New York, who I know are some of the most passionate fans in the world. It will be a fantastic event and a great way to celebrate the club’s domestic success last year.’
Supporters there can have their photo taken with the Premier League trophy and mascots Stamford and Bridget will be cheering the team on during the game and giving away celebratory merchandise.
There will be a host of other activities on the day including a virtual reality experience, skills training from our international football coaches and half-time expert analysis on the game.
Cole and Essien will also be joining Chelsea Foundation coaches to deliver sessions with FC Harlem, our partner club based in New York.
Essien is currently at Chelsea where he’s met some of the first team players before he flies out to New York.