NDC Divided Over Mahama For President 2020 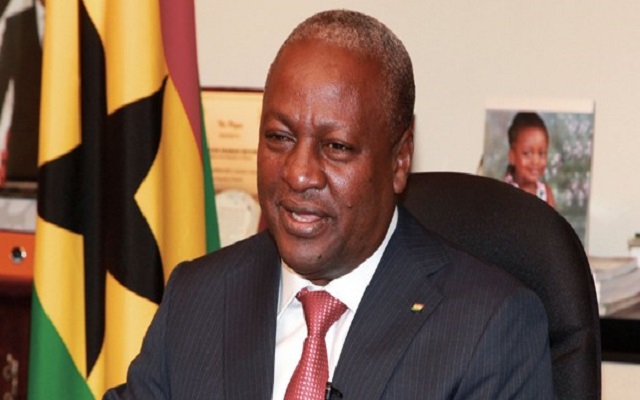 The decision by the 10 regional chairmen of the opposition National Democratic Congress (NDC) to visit former President John Dramani Mahama and persuade him to consider leading the party into the 2020 general elections has set the party on fire.

This is because supporters of the other stalwarts who are also nursing the ambition to become the NDC’s flag bearer for the 2020 elections have become incensed after the move by the 10 chairmen, in what has been termed ‘Cantonments Declaration.’

The 10 chairmen, under the direction of Kobina Ade Coker, Greater Accra Regional chairman, visited the Cantonments office of the former president and returned with an endorsement verdict similar to the ‘Swedru Declaration’ where the late Atta Mills was ‘anointed’ to lead the NDC.

The angry party people, including staunch supporters of John Mahama, are accusing the chairmen of breaking the rules of engagement thereby putting the party’s ‘unity’ agenda in jeopardy; and claimed further that they were paid hefty sums of money for making the declaration.

Financial Inducement
A supporter of Prof. Joshua Alabi – who has declared his intention to become NDC flag bearer – posted on social media platform (Facebook) that the chairmen were given GH¢100,000 each after the meeting with the former president.

DAILY GUIDE however, cannot authenticate the allegation that there was a financial inducement before the ‘Cantonments Declaration.’

The 10 chairmen threw their weight behind the ex-president last Thursday when they met him in Accra and said they wanted him to consider running again as the NDC presidential candidate for 2020.

Earlier, some NDC Members of Parliament (MPs) had trooped to the former president to pay homage with the same message.

Strangely, at the so-called ‘unity walk’ held in Cape Coast in the Central Region last Sunday, it was the same Mahama who admonished NDC members to be circumspect in their actions and added that he was not going to make a statement on whether he wants to come back to contest or not since that could disrupt the unity agenda the party had set out to push.

Defiant Group
However, barely a week after the ‘hijacking’ of the ‘unity walk’ in favour of Mr. Mahama, the NDC chairmen visited the former president, urging him to embark on a “Thank you” tour of the country, although belated, to thank party loyalists for their support during the December 2016 polls which they lost massively.

The others are Alhaji Sofo Azorka, Northern and Allotey Jacobs of the Central Region.

Uneasy Calm
The action of the chairmen has come at a time when there is ongoing ‘cold war’ over the preferential treatment being given to Mr. Mahama over the other aspirants in party activities.

The ‘dog fight’ appears to have been started after a former Consul General under the Mahama-led NDC government, Daniel Osei, criticized the way the organizers ‘skewed’ the whole programme in favour of the former president.

At the walk, it was only former President Mahama who was allowed to speak, although almost all his 2020 ‘contestants’ were present.

Bigger Disgrace
Those leading party members who are expressing concern have started condemning the chairmen for their action and said the unity agenda might not be fulfilled, if the situation in the party remained the same.

Nii Amasah Namoale, former MP for La-Dadekotopon, said it was clear the NDC bigwigs were bent on imposing the former president on the party but concluded that if that happened, a’bigger disgrace’ was going to befall the party.
“I saw what happened in Cape Coast and I’ve seen that if we will go into this flagbearership thing with a divided front, those who are trying to impose a candidate on us will succeed,” he told Class FM’s Awudu Moro yesterday.

“So, it is their (chairmen’s) association; they have the democratic right but let me tell you something, Moro, there is a bigger disgrace waiting for us ahead. There is a bigger disgrace waiting for us!” adding, “If we are so impatient, we are so bent on taking the horse to the river and forcing the horse to drink water from the river. You cannot force the horse, but there is a way you can force the horse: throw the horse into the river, when it starts drowning it will drink the water.”

Misplaced Priority
Former MP for Ablekuma Central, Theophilus Tetteh Chaie, was also incensed by the action of the chairmen and said it was misplaced and in bad taste.

“People should not behave as if they love the former president more than any member of the party. Let us restructure the party at the grassroots and then the people themselves will come out and choose their leader. What we are trying to do is we are trying to shut the door on others who have intentions to contest.”

Ensuing Backlash
In the ensuing backlash, Mr Kobina Ade Coker put up a spirited defence of his colleagues and said the communiqué they had issued was not an endorsement of the ex-president.

“The communiqué is explicit. I don’t know why we are making a hue and cry over this thing. People should read. We make Bawumia have some justification. People are not reading,” he said cheekily.

FEC’s Statement
The Functional Executive Committee (FEC) of the NDC then waded into the issue – albeit in a hypocritical, fashion – reminding the members that “internal electoral processes that allow members to engage in campaign and other political activities had not yet been officially launched,” it reminded.

“The FEC notes with extreme concern the tenor of some of these individuals in their public pronouncements. Equally, FEC notes with concern the conduct of some persons and groups affiliated to these aspirants at all levels,” the statement signed by the National Chairman, Kofi Portuphy, underscored.

“We have observed that some potential aspirants and their followers have resorted to insults, and vilification of potential contestants. This abuse takes place at times in a highly toxic manner on social media and sections of the media.

“The FEC wishes to remind potential hopefuls, aspirants and their affiliates as well as party followers that such acts constitute ‘anti-party conduct’ and at the same time destroy the cohesive unity of the party.

“Such conduct seriously undermines the painstaking efforts by the Council of Elders and the NEC to reorganise the party,” the statement added.
source Daily Guide