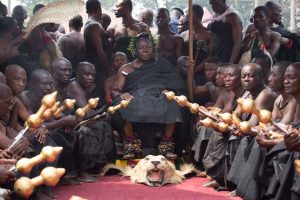 The Asantehene, Otumfuo Osei Tutu II, has explained that God stopped the rains on Thursday afternoon during the funeral of her late mother, Nana Afia Kobi Serwaa Ampem II at the Manhyia Palace.

According to him, on Thursday afternoon it rained heavily across Kumasi, with the exception of the Manhyia Palace, where the grand funeral of the late Asantehemaa was taking place.

He disclosed that it finally rained at the Manhyia Palace on Thursday evening after thousands of mourners, including President Akufo-Addo and vice President Dr. Bawumia, had left the venue.

Otumfuo Osei Tutu II stated categorically that God caused the great miracle to happen at the Manhyia Palace on Thursday afternoon so that late Asantehema’s funeral, which attracted scores of mourners, would not be disrupted.

“It rained heavily all over Kumasi on Thursday afternoon but Manhyia Palace, where the Asantehemaa’s funeral rites were taking place was spared, this miracle was caused by God. It was not done by a human being.

“God wanted the Asantehemaa, who was my biological mother, to have a befitting funeral that is why he stopped the rains in the afternoon and only opened up the heavens in the evening when the funeral rites were over.” 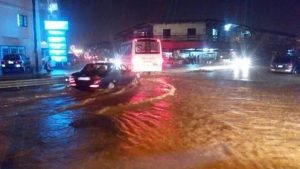 This was contained in brief speech, which was read his behalf by the Asante Juaben Paramount Chief and Council of State Chairman, Nana Otuo Serebuo, at the St. Cyprians Anglican Church on Sunday during the Thanksgiving Service for the late Asantehemaa, Nana Afia Kobi Serwaa Ampem II.

It was attended by dignataires such as the Speaker of Parliament, Prof Mike Oquaye and Alban Bagbin.

He also commended the various bodies and groups in the country that trooped to the Manhyia Palace in their numbers which made the grand funeral of Nana Afia Kobi Serwaa Ampem II succesful. 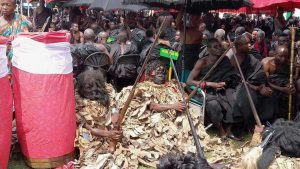 The Asantehene also thanked the media for extensively covering the funeral so far, adding that residents of Kumasi also deserve praise for complying with a curfew on Saturday night.

The church service was characterized by the singing of Gospel tunes and dancing.

The various men of God that were present prayed fervently for Otumfuo, the Asante Royal family and Ghanaians in general.