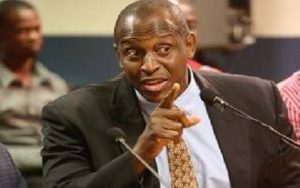 The Ghana Rugby community congratulated the President and Board Chairman, Mr Herbert Mensah, on his birthday in a year that can only be described as a remarkable year for Ghana Rugby.

Mensah celebrated his birthday on 26 December, climaxing in a year when Ghana Rugby achieved a string of accolades that included Full Membership of World Rugby, hosting and winning the Rugby Africa Regional Challenge – West 1, getting ranked on the Rugby Africa Men’s Sevens table for the first time and getting promoted to host the Rugby Africa Bronze Cup.

Herbert Mensah took over Ghana Rugby on 5th June 2014 when he was elected unopposed as President of the Union at its Electoral Congress in Accra, Ghana.

As an astute businessman and sports administrator he ordered an in-depth audit of the state of Rugby in Ghana and concluded that most of the fundamental requirements to be considered for Full Membership of World Rugby were not in place.
Between 2014 and 2017 Mensah brought in a series of changes that included the development of governing strategies and plans, the establishment of a Ghana Rugby Secretariat, the introduction of a rugby management system (scrumIT), the institution of a financial management system (Sage One), the reconstitution of the Regional Associations and Clubs, the introduction of a ten team domestic competition, the initiation of the World Rugby youth development programme (“Get Into Rugby”) and the resuscitation of women’s rugby.
Besides for the abovementioned achievements of 2017, the year also saw the introduction for the first time of a Women’s Sevens division to the annual domestic league, the Ghana Rugby Club Championship, a development area that was close to the President’s heart from the word go.

Mensah also narrowed the gender gap through the appointment of women to both the Ghana Rugby Football Union (GRFU) Board and the boards of its Regional Associations.

Mensah’s ultimate mission is to lead Ghana’s national teams, the Ghana Eagles, to participate in World Rugby and other global competitions such as the Olympics and Commonwealth Games.

Even though Ghana Rugby has achieved much in a short space of time with a lot to look forward to, Mensah’s biggest challenge will undoubtedly be to put the Union on a sound and sustainable financial footing, something that is currently absent from the sports management recipe.

Mr Adama Bakhoum, Rugby Africa Training Manager, warned the Ghana Rugby family as far back as 2016 that the funding of the GRFU by the President alone is not sustainable and that the neglect by the management of the Union to do something about the situation will place Ghana Rugby at serious risk.
Source: 3news.com