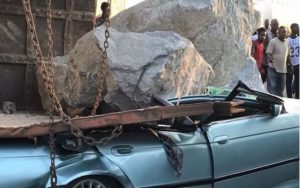 Two persons have died in a gruesome accident that occurred near the TT Brothers Traffic light intersection along the Tema-Aflao Highway on Sunday evening.

The accident which occurred at about 5:30 pm involved a tipper truck, which was conveying boulders towards Tema and a BMW salon car.

The Deputy Commander of the Tema Motor Transport and Traffic Department (MTTD) of the Ghana Police Service, Assistant Superintendent of Police, (ASP), Mr Paul Bruce Amoah told Graphic Online that the driver of the tipper truck in an attempt to avoid hitting the rear of the BMW salon car, which had veered off its lane, climbed the central reservation (the median strip othat separates opposing lanes of traffic on divided highways).

He said in the process, the boulders fell from the bucket of the truck, landed on top of the BMW salon car, smashing it with the passengers.

Mr Amoah said the bodies of the deceased persons, who were trapped in the mangled BMW car were later retrieved and sent to the Tema General Hospital mortuary.

He indicated the third passenger in the salon car who sustained some injuries was rescued and rushed to the Tema General Hospital where he was treated and discharged.

Some eyewitnesses alleged that a driver of another car ahead of the BMW was compelled to stop to allow a herd of cattle to cross a stretch of the Tema-Kpone highway.

As a result, the speeding BMW in an attempt to avoid crashing into the car in front veered into the lane of the tipper truck leading to the accident.
Source: Graphic.com.gh