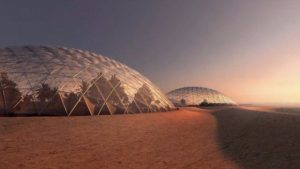 One thing you can’t accuse the United Arab Emirates of lacking is vision.

First they unveiled plans to launch a Mars probe. Then it was an ambition to colonise the Red Planet.

Now the UAE has a new aim – to become a centre for space agriculture and the promotion of research into how food might be grown on Mars.

The space sector is a huge feature of the Dubai Airshow, with exhibitions, conferences, and speakers that include former Nasa Apollo 15 astronaut, Al Worden.

But even before a UAE Mars probe leaves the ground in 2020 from Japan – UAE is working in partnership with Mitsubishi Heavy Industries – the Gulf state has now announced space agriculture intentions.

The UAE has launched a series of initiatives and university research projects to promote the growing of trees and plants.

“There are similarities between Mars and the desert,” says Rashid Al Zaabi, senior strategic planner at the UAE Space Agency. “The landscape of the UAE, the soil, are similar.”

He adds: “When we get there, we’ll have to eat.” The research, though, is not just about learning the lessons of space, but also how improve agriculture on earth.

Specifically, the UAE’s studies will look into the date palm, a tree that survives in harsh desert conditions without much water or nutrients in the soil.

Working with collaborators internationally, researchers hope to build on research already done on space agriculture involving plants such as lettuce, strawberries, and tomatoes – three foods already shown to have thrived when grown in space. 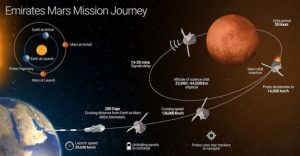 The date palm was chosen for its symbolic links with the region, as a source of food and shelter, Mr Al Zaabi says.

Although much of this may sound fanciful, there is a core underlying economic reason. The UAE, and specifically Dubai and Abu Dhabi, are trying to pump-prime the economy in preparation for an end of the oil era.

It started with a huge expansion of tourism and airlines, and the associated services and engineering that went with them. Now the UAE is moving into science and hi-tech sectors.

“There are 100 million young people in the Arab region,” says Omran Sharaf, project manager on the Mars Mission probe. ”

We want them to play a part in the future and take the region to the next level.” (The UAE’s population is about nine million, of which just 1.4 million are Emirati citizens).

He adds: “It’s about creating a post-oil, knowledge-based, creative-based economy. So it is important we become a well established scientific centre. We have created many engineers, but not many scientists. This [Mars project] is a purely scientific mission.”

The UAE has invested more than $5.4bn (£4.1bn) in its space sector, including satellites.

A final full scale mock-up of a Mars probe was unveiled at the airshow.

The survey satellite was developed using a team deliberately made up only of Emiratis, the space agency said, and will search for water and assess atmospheric conditions.

The UAE has also begun work on its Mars Science City, a centre dedicated to studying the colonisation of the planet. The series of domes in the desert, with two million square feet of living space and research facilities, will investigate food, water and energy needs. 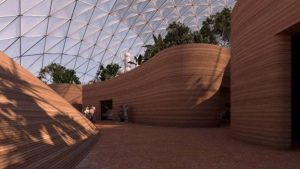 The Mars mission makes the UAE one of only nine countries exploring how to get to the planet, Mr Sharaf says: “It means our investment in facilities and education – science, laboratories, universities – will need to be very big.”

And, according to Apollo 15 command module pilot Al Worden, it will also require international cooperation. He’s impressed with ambition of the UAE’s project, and what’s been achieved so far. But he adds: “The scale of the technological challenge will be too much for one country.”

The purpose of making space a big feature of the airshow was to attract international experts to participate, says Yousuf Hamad Al Shaibani, director general of the Mohammed Bin Rashid Space Centre.

Making the industry such a big features of this week’s biennial Dubai Airshow was meant to be “an opportunity to meet with major international aerospace companies and institutions, and build strategic relations”, he says.

Even the UAE’s rulers have described what they are trying to do as “an epic challenger”. Assuming everything progresses as planned, the final step will be a manned landing on Mars – within the next 100 years, that is.

It may never happen. But at least the country will have created a new generation of scientists in the Gulf – and learned how to grow a lot more fruit and veg in the desert.