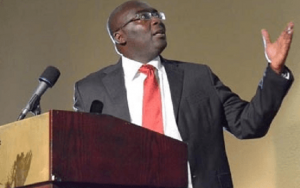 The new government of Zimbabwe insists it is not interested in engaging Vice President Dr. Mahamudu Bawumia as its economic adviser.

This was made known by the lawyer of Zimbabwe’s incumbent president, Emmerson Mnangagwa, who argues that Zimbabwe has the capacity to manage the affairs of its failing economy.

Dr. Bawumia, then running mate of the NPP, was sought after by former president of Zimbabwe, Robert Mugabe, to be the special economic adviser to the president.

Records suggest efforts by Mr. Bawumia helped to improve the financial outlook of the country which was for 37 years, led by Mr. Mugabe. But speaking in an interview with Kasapa FM, Farai Mafunga argues that the new administration in Zimbabwe will be putting in place the needed economic policies to revamp the already failing economy.

Thousands of Zimbabweans took to the streets of Harare in a jubilant mood minutes after the embattled president issued a letter stating his intention to resign from office.

Mugabe’s resignation was made known just minutes after members of the Zimbabwean parliament were starting an impeachment process against him.

His resignation was thus announced by the speaker of parliament, Jacob Mudenda, who is currently the acting president of the country.

But reacting to the historic development, president of Ghana, Nana Akufo-Addo, stated that the purpose of Mugabe’s resignation could be replaced should a peaceful resolution not be reached.

Mugabe, who ruled Zimbabwe for 37 years, disappointed millions of Zimbabweans over the weekend when a national address expected to see him resign turned out in the opposite. Mugabe in the crucial address rather called for unity and ” a fighting spirit.”

Robert Mugabe was the second president of Zimbabwe from 1987 to 2017[3]. Earlier, he led Zimbabwe as Prime Minister from 1980 to 1987 and also chaired the Zimbabwe African National Union (ZANU) group from 1975 to 1980, leading it until recently.

Mugabe has steered the affairs of Zimbabwe’s politics for over 40 years. His controversial figure and divisive political ideologies have seen him fiercely criticized as he has been blamed for economic mismanagement, widespread corruption, anti-white racial discrimination, human rights abuses, suppression of political critics, and crimes against humanity.