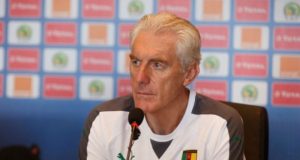 The Cameroonian Football Federation (FECAFOOT) has sacked Hugo Broos 10 months after the coach masterminded an unexpected African Nations Cup triumph.
After the nation’s catastrophic 2014 World Cup, Broos was hailed for his work in taking a side that had failed in Brazil to the continental crown in Gabon in February.
However, Cameroon failed to win any of their three games at the 2017 Confederations Cup, and Broos was then unable to steer the team to next summer’s World Cup.

In a statement, FECAFOOT’s normalisation committee said Broos’ failure to return the country to an “honourable” place in FIFA’s world ranking — they are currently 45th, the seventh-highest ranked African nation — and to “live in Cameroon during the execution of the contract to follow the national championships” were further reasons for his dismissal.
It also noted Broos’ inability to convince “several important players” not to reject their call-up to the national team, such as Liverpool’s Joel Matip before the African Nations Cup, and highlighted that — with the 2019 edition to be held in the country — “it has happened to Cameroon several times in the past to change coaches a few months before the competition and to then perform very honourably in that competition and even win it.”\

Broos, whose contract with FECAFOOT ran until February 2018, remains in the running for the CAF African Coach of the Year award.
The honour, for which former Valencia and Inter Milan boss Hector Cuper, currently the coach of Egypt, is also a contender, will be handed over at a ceremony in the Ghanaian capital of Accra on Jan. 4.