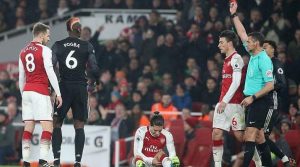 Paul Pogba will serve a three-match suspension after Manchester United decided against appealing the red card shown to the midfielder in their defeat of Arsenal.

Pogba, the France midfielder, was dismissed in the second half of United’s 3-1 victory for stamping on the leg of Gunners defender Hector Bellerin.

The 24-year-old will miss matches against Bournemouth and West Brom, as well as the Manchester derby against local rivals Man City, which is to be played this coming Sunday.

Jose Mourinho confirmed Pogba will start against CSKA Moscow on Tuesday evening, with United needing only one point to guarantee their place in the Champions League last-16.

“He’s happy to play tomorrow. It’s the next match, the match that matters. He plays tomorrow,” said Mourinho.

“He’s very happy to play and try to keep his momentum because since he was back from his injury he’s been phenomenal.”