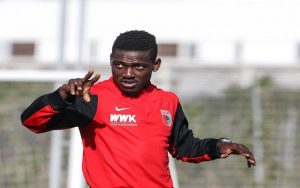 Black Stars lateral defender Daniel Opare may be on his way out of the German Bundes Liga as he has been linked with some English Premier League clubs this January.

The Augsburg player has his contract running out in the summer.

He has been named by BBC as among players to make a move when the winter transfer window opens.

Four Premier League clubs are said to be chasing the former Real Madrid Castilla player.
West Ham United, Stoke City, Everton and Swansea City have all been linked to moves of securing the signature of the 2009 FIFA U-20 World Cup winner.

He will join the likes of Andre Ayew, Daniel Amartey, Christian Atsu, Jeffrey Schlupp and Jordan Ayew as the Ghanaian players in the Premier League.
3news.com