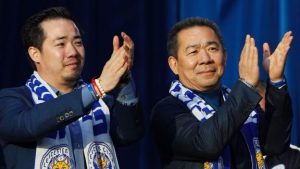 The owners of Leicester City Football Club are reportedly being sued for £323m over money owed to the Thai government.

A criminal court in Bangkok accepted the case against King Power International on Monday, according to Reuters news agency.
The case is also being brought against executives of state-owned Airports of Thailand (AOT), Reuters says.
The BBC has contacted Leicester City FC, King Power and AOT for comment.
The lawsuit accuses King Power of failing to pay the Thai government 14 billion baht (£323m) from the operation of a duty-free franchise it was awarded in 2006.
At a hearing on Monday, the Central Criminal Court in Bangkok accepted the case and said it would now hear from witnesses in February next year.
The action against King Power, owned by Vichai Srivaddhanaprabha and his family, was initially filed in July.
Retail business King Power was founded by Vichai Srivaddhanaprabha in 1989
The company was awarded its Thai duty-free monopoly in 2006
Srivaddhanaprabha, who is worth an estimated $4.9bn, bought Leicester City in 2010
King Power also own Belgian club OH Leuven and have a controlling stake in the operator of AirAsia
Source: BBC