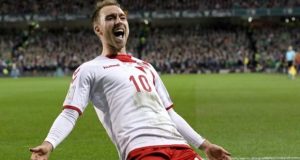 Tottenham midfielder scored a hat-trick as Denmark advanced to Russia

Denmark secured Europe’s final qualification spot for the 2018 FIFA World Cup Russia™ with a 5-1 victory away to the Republic of Ireland on Tuesday evening for a 5-1 aggregate result. It is the fifth time that the Danes have qualified for world football’s showpiece event.
Despite falling behind early, the Scandinavians responded with five unanswered goals to secure their place at Russia 2018, with Christian Eriksen leading the way with a hat-trick in Dublin.
A pulsating first half at the Aviva Stadium saw the Irish take an early lead through Shane Duffy on six minutes. He converted Robbie Brady’s free-kick with his head after Nicolai Jorgensen misplayed the set-piece in the Danish box.
The early goal led to an open spell of play, with quality chances at both ends. It was around the half-hour mark that Denmark turned the match around with two valuable away goals.
They levelled matters on 29 minutes following a short corner. Sisto Emirmija’s incisive run and low cross found Andreas Christensen, who knocked the ball off the post before the rebound took a deflection off of Republic of Ireland defender Cyrus Christie and found the back of the net for 1-1.
Three minutes later, an unmarked Eriksen put the Danes in front with an unstoppable finish off the underside of the crossbar after the visitors broke forward on the counter-attack.
Any hopes Republic of Ireland had of turning this two-leg play-off tie around were dashed shortly after the hour mark, as Eriksen struck again with a well-taken second goal, as the Tottenham Hotspur man neatly placed a left-footed finish past Randolph to extend the visitors’ lead.
Eriksen would claim the match ball with a fortuitous third goal on 74 minutes, as he powered home with his right foot after Stephen Ward misplayed Jorgensen’s cross into the Irish box. The goal put him on a record 11 goals in World Cup qualifying for his country.

A late Nicklas Bendtner penalty emphatically confirmed that the Danes would be the ones celebrating in the Irish capital.
Denmark’s qualification follows their four previous appearances at the global finals, having reached Mexico 1986, France 1998, Korea/Japan 2002 and South Africa 2010.
Source: Wires