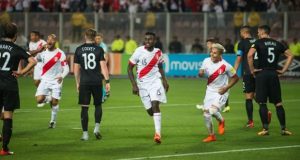 Peru are heading to their first FIFA World Cup™ in 36 years after a goal in each half was enough to see off a resilient New Zealand in a raucous Estadio Nacional in Lima on Wednesday.

Goals from Jefferson Farfan and Christian Ramos midway through either half did the damage to kick-start wild celebrations across the South American nation.

Following Saturday’s scoreless draw in Wellington, Peru dominated large periods of the return without ever being allowed to turn on the style against a well-organised New Zealand.

Peru, somewhat ironically, opened the scoring via a quick counter-attack as playmaker Christian Cueva perfectly teed up Farfan to rifle home an unstoppable effort from near the penalty spot.

New Zealand were just starting to get a foothold in the match following the half-time introduction of star striker Chris Wood, when La Blanquirroja doubled their advantage. The All Whites were unable to deal with a corner allowing Ramos to latch onto a loose ball and fire home from close range.

Wood had New Zealand’s best chance in the final minutes but he was unable to take advantage of a one-on-one thanks to pressure from goalkeeper Pedro Gallese.